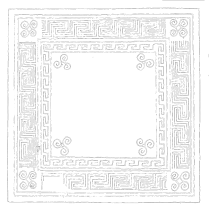 “The family was the theatre of a domestic cult, at once the most ancient and the most secret, as it was at Rome or in Greece. This cult was attached to the house, itself regarded as a temple, whose hearth was in some sense the holy of holies. In this the Celts were no different from other Indo-European peoples; archaeological discoveries amply confirm this: among domestic material, equipment used for the fire was The finest and had the most obvious symbolic content. The fire protected the house and the family. It was perhaps inhabited by spirits, like the Penates, Lares, and Genius of the Romans.

The hearth took the place of an altar, and we must imagine that its vicinity was sacred. In the houses of The Newar in the Kathmandu valley, the room where Cooking was done was treated as the sanctuary and only family members could enter it. In antiquity, cooking was not differentiated from sacrifice; meat could not be eaten except by means of a ritual that could be directly related to that sacrifice. The hearth was therefore symbolically arranged to this effect. Sometimes it bore decoration which leaves its sacred character in no doubt; this is the case with the altarhearths found in settlements of Languedoc, plaques of baked clay on which geometric patterns, volutes or circles were engraved.

All the equipment designed for the maintenance of the fire had this double character, ritual and domestic. First of all there were firedogs, whose shape in the form of a ram can be explained in religious terms. This animal was the preferred sacrificial victim for divinities of the hearth in most Indo-European lands. Cicero says that the domestic Lar was honoured by such a sacrifice. In India the god of fire Agni was represented on a chariot pulled by two white rams. The Celts had the same beliefs and made the same offerings: the representation on these firedogs of rams hung with garlands and therefore ready to receive the fatal blow confirms it.

The other utensils – spits, gridirons, or iron tables – are highly evocative. These are objects whose model was Greek or Etruscan and whose primitive function was cultic. A spit, or rather bundle of spits, was the emblem of sacrificers in Greece as in Italy. There exist numerous representations of these spit-bearers, in a procession or approaching a sacrifice. The function of the great iron tables, still called ‘sacrificial toles and decorated with four heads of rams or Cattle, is no less suggestive. This domestic cult, designed to protect the house and family, was equally connected with the cult of the severed head. We know in fact from Diodorus that the Gauls kept the heads of their most illustrious enemies in their houses, carefully stowed away in a chest. Like the ones they hung over the doors of their dwellings, these skulls were not only trophies but had a truly apotropaic function. The proof of this is that they could not be parted with even for the most enormous sums of money. “ – Jean Louis Brunaux, The Celtic Gauls: Gods, Rites and Sanctuaries (The Domestic Cult)

As the first line makes clear, hearth cult for the Gaulish speaking people was most secretive, leaving only traces of its existence without details of performative action. It is an unfortunate and understandable concept which the Bolgoi will have to accept; while we can innovate a hearth cult format and the format itself, the actions and performance of it must remain secretive as it is only to be displayed by and to one’s family (NOTE: this doesn’t include the results of the actions. The author themselves enjoys displaying photography of offerings to gods and their iconography, so this is not taboo; only the performance is undisplayed).

While it may be a worthwhile endeavor to further engage the archeological findings which display trace amounts of hearth cult, it would yield objects that most contemporary polytheists (Bolgoi included) do not have access to. These objects would most importantly include an actual hearth and/or fireplace; two great requirements of the hearth cult in antiquity.

Not only this, but it is infeasible to expect a hearthfire to be lit and tended to at all times for a myriad of reasons too great to list. We shall therefore define hearth cult as ‘home religion’, which is to say all religious activity inside the dwelling, not limited to religion of the literal object, the house. By defining hearth cult this way, we can involve a ‘hearth god’ in all cultic activity inside our domicile, whilst not ignoring devotions to other gods.

For this we’re going to borrow heavily from Segomâros basic ritual formatting and whilst modifying it slightly:

Dau̯tos aidous/Making of Sacred Fire: For indoor rituals, we use a candle, but for outdoor rituals, a fire is more appropriate.  It is the holiest component of ritual, and forms a route of communication with the gods. It is a symbol of the presence of the divine spirit/hearth god and the sacred center of all things, protecting the sacred space.

OUTDOORS/FOREIGN SPACE STEP: Urextus Cagi / Making the Rampart (not for one’s *Certos): This is something that doesn’t need to be done inside the *Certos, as the hearth god and tegosia already keep the home sacred and holy. This is kept for outside ritual spaces or foreign dwellings, which is why this portion remains.

Areadbertâ/Pre-Offering: During this, the fire is strengthened and offered to for protection in the sacred space (in this case, our *Certos). We can offer incense, and/or butter.

Adbertâ (gatekeeper in dative) Offering to Gatekeeper/Messenger: This is a small offering to a gatekeeper/messenger god, so they will open the way to the other deities and divine realms. This makes certain that prayers go where they are supposed to, and that clear communication is maintained. Carnonos/Cernunnos is a popular choice, but any liminal god (such as Entarabos) would be appropriate. Pour out a small amount of what you are offering into the offering bowl.

Adbertâ/Offering: This is the main offering of the ritual. It is the heart of the ritual, in which gifts are given to the Gods involved. Prayers are said during this portion.

Dexiu̯osu̯elos Aidû: Inspired by aarti in puja, this serves two purposes: to drive away darkness from the gods and to keep the theme of Indo-European circumambulation inside the ritual. This gives the god icons warmth and represents their power. It would be appropriate to sing their praises during this. We circumambulate the flame three times around them, once for each world, clockwise and NEVER (anti) counter clockwise.

Clau̯iiâ/Closing:  Here, we give thanks to the main deity called on for the rite. We also thank our gatekeeper afterwards.

Clitâ Aidus/Covering the Sacred Fire: Here, we respectfully cover the sacred flame which represents our Deu̯on *Certon (hearth god). It is not to be blown out ever.

Ulidâ/Feast: It is a good rule of thumb to not eat an hour before ritual. This can include a small meal such as a glass of milk to a sandwich.

The other ritual formats still operate well, so the Bolgoi need not worry about daily devotions that this ritual may lengthen. This format may serve as a weekly type of ceremony if one were so inclined.